Heading south for a seabass adventure. In the past 24hrs we’ve done the ‘planes, trains and automobiles’ and now we’re adding ferries to the list. Travelling through the countryside I’m amazed at the amount of forest there is in this part of the country. After spending time around Osaka to Tokyo region you could be forgiven for thinking the Japan is just one vast urban sprawl.

Kyushu, like much of japan is pretty mountainous: towns, cities, and farms all vie for space in what little flat areas there are, especially close to the coast. The steep hillsides are draped in many shades of lush forest green. There are bridges aplenty to cross on the way to the ferry, I soon loose track of which island we are on now. The islands are intersected by channels of deep, clear water and ripping currents. These channels are home to seabass as well as kingfish, while a multitude of little bays and harbours are home to kurudai (black bream). Eventually we run out of bridges, and reach a ferry terminal to take us to Hirasime island.

The trip on the old ferry takes around 2.5hrs with a couple of stops on the way. The weather is pleasant, about 12 degrees and fairly calm, but the forecast is foreboding. Strong winds and temps down to freezing are predicted over the next couple of days. The seas are predicted to rise to 3m as well, but Tsurusaki assures us that the island is fairly protected from the open sea swells.  Eventually we pull into the small harbour on Hirasime, seconds later we are driving up the gangway onto the narrow island laneways. The word ‘hira’ means flat, but I can see nothing flat about this place. Evidently it is all-relative; if you don’t need ropes and cranes to access the island, then it can be considered flat! The island used to have a busy industry quarrying sandstone but the only business remaining now are a handful of commercial fisherman, mainly chasing squid. Most of the younger generation have left the island for work opportunities elsewhere, leaving a few hundred hardy islanders behind. 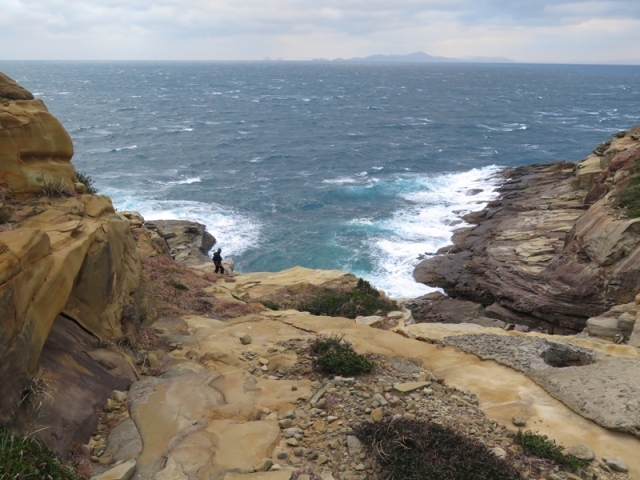 It’s getting late so we hurry to catch last light on the rocks. Aside from a few half-hearted hits on the lures, there is not much action this evening, however, we learn a lot about seabass. Firstly, you need the rock hopping skills of a mountain goat to fish these ledges easily. Tsurusaki san has a few years on me and plenty over Brett, but he leaves us for dead over the boulder strewn ocean shore. Secondly, the rock fishing boots he procured for us are absolutely indispensable. The spiked felt soles grip like nothing else, and are certainly no relation to the cleated shoes I wore on the Sydney rocks as a teenager.

Most importantly, we get a lesson in Seabass psychology. They behave a lot like a cross between an aggressive tailor and a cautious barramundi. The first one or two casts can be fished quite fast to get the attention or a reaction strike from the fish. If they do not bite straight away, you then switch to fishing the lures very slowly with an occasional pause. The seabass get attracted in close by your first couple of casts then they hide among the rocks waiting to ambush prey right in the wash zone. Most of the strikes come just as you are about to lift the lure from the water. It can be quite a challenge to slowly and methodically swim the lure in the washing machine at your feet, but using the surge to help swim the lures along the rock face is a deadly technique here.

We end the day camping by the harbour, demolishing our instant ramen in seconds, before a fairly rough nights sleep in the back of the car.